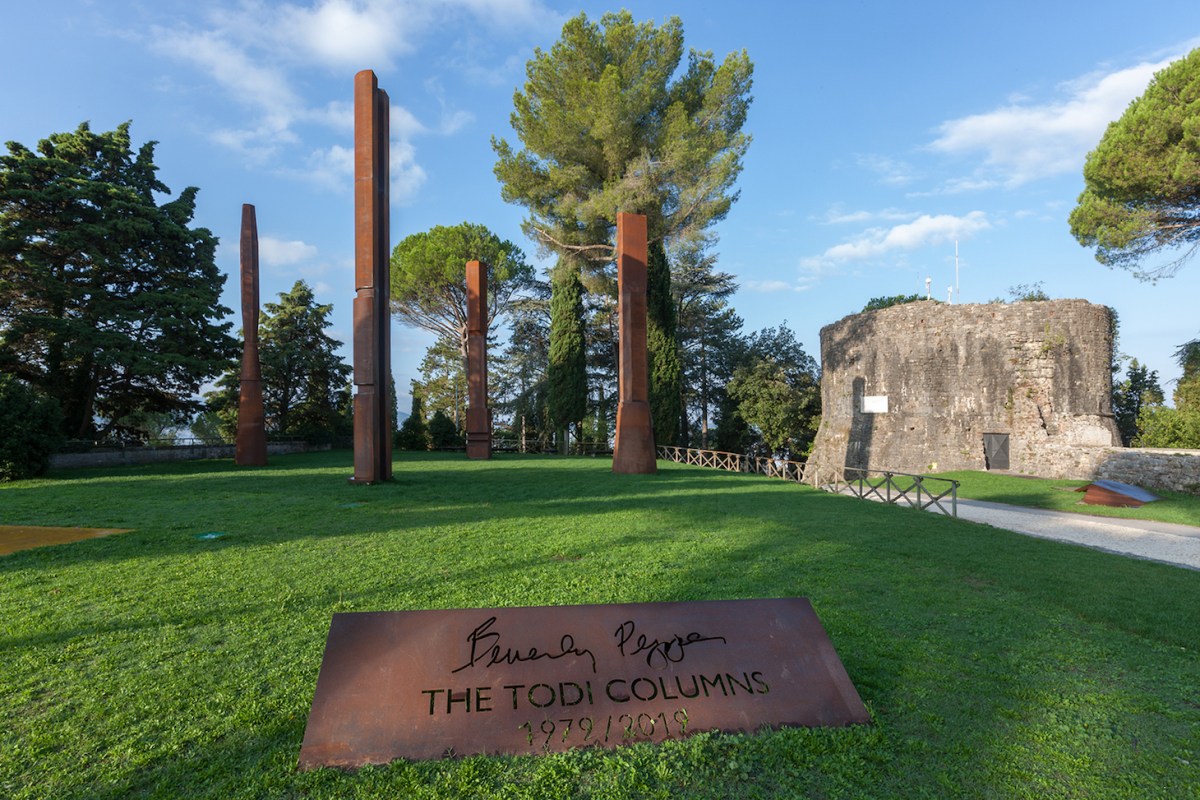 Posted at 17:24h in Press by superpepper

I had questions for Pepper, but I arrived too late.

TODI, Italy — The medieval town of Todi, Italy, was damp, tomblike, and absent of tourists when I arrived in February of 2020. In retrospect, the mood was ominous. COVID-19 would make its vaporous arrival in a few weeks. I made a pilgrimage to this Italian hill town to catch a glimpse of Beverly Pepper, who had died a week earlier. I admired this expat American artist because she stayed the course, working with the gendered material of steel at enormous scales. Her peers were the he-men of minimalism — Donald Judd, Richard Serra, David Smith, Robert Smithson.

I had questions for Pepper, who died on February 5, 2020, at the age of 97, but I arrived too late. I wondered if she ever resented attaining less success than her male contemporaries; if the formula for women’s art-world survival during the 1960s was to move to a remote place without distractions; if making monumental sculptures kept her strong and alive as she entered her 80s and then 90s. Was the weight of steel a foil to the atrophying of bones?

Pepper’s daughter, the Pulitzer Prize-winning poet Jorie Graham, addressed human frailty and family challenges in her 2017 book Fast. Aging, sickness, the decline of her parents, as well as her own cancer diagnosis pockmarked this slim volume. But despite the shared hardships Graham reflected upon in the book, the last two years of Pepper’s life were a fury of activity propelled by several monumental projects that needed completion: the Beverly Pepper Sculpture Park in Todi and the 1,800-seat Amphitheater in the city of L’Aquila, Italy, which opened at the end of 2019 and in September 2018, respectively. While Graham was giving form to aging in her poetry, Pepper was sculpting a legacy. Both artists seemed to know that without diligence, both memories and reputations will evaporate, especially if you are a woman.

It’s not easy to find the trail that zigzags down the Todi hillside, revealing 16 sculptures in the Beverly Pepper Sculpture Park. I asked for directions twice. One end of the trail is tucked to the side, behind the church of San Fortunato. This lack of fanfare gives way to the gift of discovery. The trail snakes into the woods, where the sculptures are spread over five acres, far enough apart to unveil surprises. The park is also speckled with archeological remains, such as a partial Roman column and a fragment of an Etruscan wall.

Some of Pepper’s sculptures, as in “Trinity” (1971), keep close to the ground, suggesting a cowering Pterodactyl. Others have the vertical stances of sentinels. Materials range from wood to Cor-ten steel to the shiny stainless steel of her earlier works. The sculptures feel animated and slightly creatural. The feel of artifacts inflects these works. They have an organic relationship to this wild place, in contrast to objects made for the manicured grounds of an institutional sculpture garden.

“I live in the present but draw from the past, both within the back of the mind and within the substrates of history. Counting on a future is too problematic. In these controversial times, it’s hard to believe that we will survive. So I focus on the present as projected from the past. I think that my works end up “knowing” more than I can about the future — and clearly I’m interested in materials that endure, that might have something to say to those who come after us.”

About midway down the trail, I encountered a monumental group of sculptures called the Todi Columns, which were first installed in the town’s Piazza della Republicca in 1979. Here, the sculptures occupy a small, flat plateau. Benches designed by Pepper provide a place to sit and take in these totemic forms that seem to be sunning themselves, reaching upward, conveying a sense of joy. I got out my sketchbook and drew “Traiana.” They are all tool-like but “Traiana” transitions from a round, tapered base at the bottom to a multi-sided wrench in the middle to a flat-head screwdriver at the top. It is remarkably elemental and its form and proportions feel perfect. The reference to tools adds a hint of humor, a whiff of Claes Oldenburg merged with ancient, monolithic permanence.

“Aventinus,” “Senatoria,” and “Martius” complete the group and interact with the nearby towering trees. These rust-colored metal totems look as if they’ve descended from a civilization that worshipped steam, steel, and iron. And yet Pepper drew the visual language of industrialization into conversation with the romance of a medieval town built of stones on blustery slopes.

I ran my hand over the rusted surface of “Senatoria,” circling its contours, grateful for this modern, metalliferous intervention in the 14th-century landscape, a reprieve from the golden splendor of altarpieces. As Pepper once said,

“Everything in the world slowly converts into iron. It is everywhere, even in a teardrop. Perhaps an awareness of this final, imperishable destiny plays a role in my feeling for its power and potential […] And it’s always gripping to work in a material that has been such a crucial part of human culture, from the literal Iron Age to the great periods of industrial construction and beyond.”

Born and raised in Brooklyn, Pepper had lived in a renovated castle 10 miles outside of Todi since 1972; prior to that she lived in Rome with her journalist husband, Curtis Bill Pepper, and their two children. But even with 48 years of expat residence in Umbria, her outsider status could have made it difficult to gain the town’s support for this project. Maneuvering something as complex as securing public land for a sculpture park takes monumental conviction.

Pepper’s assistant, Elisa Veschini, said that the sculptures had actually been donated by Pepper several years earlier. Then, in 2016, the municipality of Todi requested funds from the European community to redevelop the area of the park that would include the sculptures. “What was complicated, because it was not part of the original project,” said Veschini, “was to include the sculpture-benches that Beverly designed for the park made with local stone, pietra serena. Beverly considered them necessary because she saw the benches as meditative points from which to observe the works and the landscape.” The benches are weighty, curving slices of stone, both sculptural and functional.

Few other sculptors have left legacies of this proportion, fusing their work with its surrounding landscape. Donald Judd’s installations in Marfa, Texas, and Niki de Saint Phalle’s Tarot Garden, in Tuscany, come to mind.

Pepper’s sculptural language reflects the mathematical precision of antique sculpture or Gothic quatrefoil, vaults, and arches, but it was seeded by postwar American forces. There are no other contemporary sculptures in this town. And yet, her work seems made for this hillside, with its angled and totemic forms, velvety in patinated Cor-ten steel skins. Pepper’s sculptures do not disrupt the historic town and verdant hill, but rather embrace the passage of time and history in the region.

For Pepper, living a life as an expat in a secluded castle-fortress 15 kilometers from town was integral to her work. The hilly, rural landscape provided inspiration, while allowing her to “[…] discover so much more about myself — or to find out how little I know about myself,” as she said in Architectural Digest (October 1978).

“To dwell is to leave a trace,” Jorie Graham writes at the end of Fast’s title poem. Beverly Pepper has left her mark.